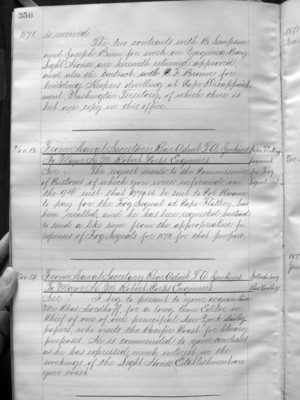 The two contracts with B. Simpson and Joseph Bien for work on Yaquina Bay Light House are herewith returned approved and also the contract with C. F. Brown for building Keeper's dwelling at Cape Disappointment, Washington Territory, of which there is but one copy in this office.

The request made to the Commissioner of Customs of which you were informed on the 9th inst. that $774.86 be sent to Col. Duane to pay for the Fog Signal at Cape Flattery has been recalled, and he has been requested instead to send a like sum from the appropriation for expenses of Fog Signals for 1872 for that purpose.

I beg to present to your acquaintance Mr. Chas Nordhoff, for a long time Editor in Chief of one of our principal New York daily papers, who visits the Pacific Coast for literary purposes. He is commended to your courtesies as he has expressed much interest in the workings of the Light House Establishment on your coast.

Last edit about 3 years ago by gkazebier
1 record

Show pages that mention Col. Duane in all works