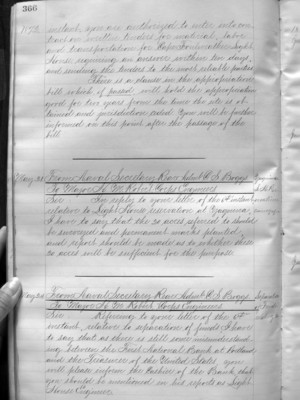 instant, you are authorized to enter into contraction written tenders for material, labor and transportation for Cape Foulweather Light House, requiring an answer within ten days and sending the tenders to the most reliable parties.

There is a clause in the appropriation bill which, if passed, will hold the appropriation good for two years from the time the site is obtained and jurisdiction ceded. You will be further informed on this point after the passage of the bill.

In reply to your letter of the 6th instant relative to Light House reservation at Yaquina, I have to say that the 20 acres referred to should be surveyed and permanent parks planted and report should be made as to whether these 20 acres will be sufficient for the purpose.

Referring to your letter of the 6th instant, relative to separation of funds, I have to say that as there is still some misunderstanding between the First National Bank at Portland and the [ Treasurer of the United States, you will please inform the Cashier of the Bank, that you should be mentioned in his reports as Light House Engineer.

Last edit over 3 years ago by gkazebier
Displaying 1 Page